My Father-in-Law is in the hospital. When I set out for my run on Sunday, I prayed that God would allow us to keep this man here a year for every mile I ran, that day. Not wanting to be greedy, I stuck to 20 miles. Crisis averted!

So, that's a big, fat downer and I like to keep things on the lighter side. In the absence of light, humorous or thought-provoking material, I turn to my old standby : mundane.

Still reading? If so, my lucky friend(s?), you're about to be rewarded with some Training Talk!!

When I realized I was, in all likelihood going to recover from my stress fracture, I made the sketchy decision to keep my first marathon on my race schedule. If nothing else, my children had now been promised a fabulous Runcation. When the finish line looks like this, it'd be difficult to tell them "There's been a change of plans based on the fact that mommy's dumb". 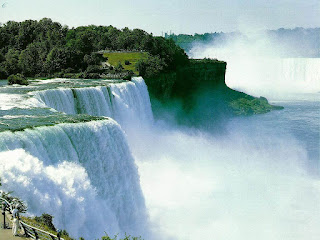 I had to get them excited about my marathon somehow!
If you think making that decision was the hard part, you've obviously never tried finding a training plan titled "So You Knocked Out a Few Solid Weeks of Marathon Training, Ended Up With a Stress Fracture and Now You Have Eight(ish) Weeks Until the Big Day. Oh, and You're Not an Elite or a Beginner. Also, You'd Still Love to Finish in Sub 4".
I'll save you the trouble of Googling. It doesn't exist. In the absence of an actual plan, I went ahead and combined four different training plans.
My head was ready to explode and I never knew if I was doing too much or not enough. Injury can leave you in a state of constant doubt and paranoia regarding your running abilities. For example : How do you determine your "easy" pace when every running step suddenly feels totally un-natural and HARD?! Trying to combine my newfound fears and confusion with an overwhelming jumble of imperfect (for me) plans, turned me into a mess.
Sure, I was knocking out the miles. I was doing it like it was my job. Unfortunately, it was a job I despised and didn't feel rewarded by. It was the one you get up and do, every day, and wonder why you're doing it. While I was grateful for the ability to be able to run again, my confusion and apprehension were sucking the life out of it.
Last week, though, I hit a turning point.
I ran a 10-miler, as a planned Progression. The first mile was purposely slowish and I worked on making each subsequent mile about 10 seconds faster. I wanted to run it that way, until finishing 9 miles, and then have the final mile be more of a cool-down. (back to a slower pace) It ended up looking like this: I wasn't looking at my watch until the end of each mile, in an effort to pace by feel
Goal: 9:30 Actual: 9:30 (nice & easy)
Goal : 9:20 Acutal: 9:16 (this mile's usually my fastest. had to work to keep it slow)
Goal: 9:10 Actual: 9:12 ( trying to compensate for the previous one being too fast)
Goal: 9:00 Actual: 8:59 (hilly mile, too!)
Goal: 8:50 Actual: 8:42 (math was becoming difficult, at this point)
Goal: 8:40 Actual: 8:38 (short pitstop. nice when the route goes right by your house!)
Goal: 8:30 Actual: 8:28 (faster than I've been running, lately, but felt great)
Goal 8:20 Actual: 8:22 (had no idea if this meant I was still on track, or not)
Goal 8:10 Actual: 8:36 (definitely NOT on track, anymore)
Goal : slower, cooldown 8:55 (haha...success!)
I had water and a gel with me, which helped. However, I'd also brought along the head and chest congestion from my recent cold. (Next time I'll try to leave those at home.) Those additions made an already difficult run pretty darned ugly.
When I was finished, and trying to minimize the puddles of sweat I was leaving around my house, all I could think of was how HARD that had been. 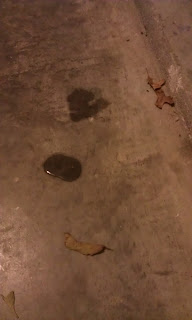 actual puddles of my sweat, from that run. Gross, eh?
Those thoughts were quickly followed by another, cautiously happy one, though. It was hard, but I'd done it. Other than that 9th, wack-o, mile...I'd set out with a goal in mind and had accomplished it. Who cares how much phlegm I ﻿'d hacked up or how many times I questioned why I was doing this and trying to talk myself out of quitting. I. had. done it!
Was it possible that I was actually seeing improvement? Was this clustermess of "training" actually working?
The next day I limited my running to the deep water of the pool. I did a tough ladder workout and my legs felt sufficiently "worked".
Two days after my 10-mile run, I felt the need to run 4, easy miles, even though it wasn't part of any of my modified training plans. Due to my ever-interesting schedule, my only option was to run them all in a monotonous loop around my block. Many, many times. This time, I chose to not look at my watch at all. I just wanted to run those annoying circles, keep it feeling good and easy, and get it over with.
When I finished, I was shocked and delighted to see my splits had ended up like this:
8:51
8:40
8:12
7:59
What the heck?!
That was the moment I realized it was all coming back to me. Finally. All the confusion and doubt dissipated as I learned what it means to truly listen to your body. My next realization was that a final 20-mile run, before my marathon, needed to happen this week.
It ended up being superb timing. My body and spirit held up like champs for all those miles and everything since then has fallen into place beautifully.
I've scrapped all the plans, spreadsheets and guides. I'm trusting my body and instincts to get me to that starting line healthy, happy and ready.
Who knows. If it works, maybe I'll type of my own "So You Knocked Out a Few Solid Weeks of Marathon Training, Ended Up With a Stress Fracture and Now You Have Eight(ish) Weeks Until the Big Day. Oh, and You're Not an Elite or a Beginner. Also, You'd Still Love to Finish in Sub 4".  training plan. It would probably not have much competition on any search engines...
Care to share anything you recently learned?
Do you prefer a strict plan or do you train based more on feel?
﻿
﻿
﻿
Posted by Jennifer at 5:25 AM