I had plans to recap last week's workouts, due largely in part to them actually involving running. Then I realized, if anyone *really* cares, they can always check out the stats on Daily Mile. Also, I do have plans for a (near) future post regarding some recent low highlights.

Happy Belated Labor Day, all!! I notice you didn't get me anything to celebrate.
For future reference : I'm not sure what constitutes an appropriate Labor Day gift, but cash is always acceptable around here.


The Littlest had an extended, fun-filled weekend. Remember, he started that whole virus thing. So, by the time the rest of the family was afflicted, he was ready to party. He got to go hang out with my parents (thanks, Buddy & Papa!) while The Husband and I took turns whining and vomiting. After we re-joined the Land of the Living, we kept pretty busy. all of these children were attended, I swear. We were right under that pavilion! See?
The boys and I joined family, friends and my running group for a relaxed, Labor Day, run/ride. We got to jog behind the kids' scooters, bikes and ripsticks, praying they didn't clip anyone's heels. (btw, if anyone's heels were clipped, it was those other kids, I'm sure) 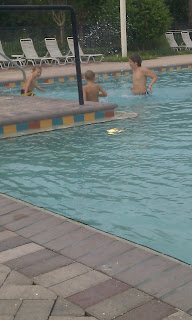 ﻿
the splash fights always start with laughter and end with tears 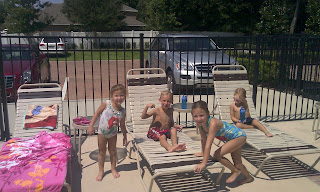 going to friends' pools is like vacation! (or so I tell them)
We wore them out nicely with extra swimming, too. An extra day to play with his brothers and neighborhood friends made everyone extra-happy, too.
The poor guy had some Monday Morning (on Tuesday) blues, today. He was not at all excited about getting out of bed, ready for school or out the door. By the time we were on the sidewalk, walking towards the entrance, the child was literally dragging his feet.
Fresh out of patience, I tried a new tack. I told The Middlest his brother needed some cheering up and suggested he tell us all a joke. Oddly compliant, he immediately piped in :
"Okay. Why did the chicken cross the street?"
The Littlest responded with some sort of unpleasant grunt and I said "Why?"
The Middlest answered : "Because he needed to get to school! Let's go!". (Turns out his patience was limited, as well.) Luckily the laughs we got from that, in addition to some of my own juvenile outstanding knock-knock jokes, were enough to brighten the mood. The Littlest didn't exactly skip to join the other Kindergartners, but he wasn't a total Grumpus, either.
In regards to getting back into Running Shape, I have tried just about everything. The times my mind is ready (woo-hoo! we get to run! we can totally do this!) my body doesn't comply. When my body decides to not ache and twinge, my mind and doubts step in to crash the brief party. (whoa! slow the heck down, pal. This body was made for gentle walking and foot-elevating, only. Remember?!)
My old routines and mantras are useless. I've tried bribing myself.  I've learned that turning up the volume on one's i-pod does not, in fact, drown out nausea and self-loathing. Paying people to tell me I'm doing a great job loses it's appeal after a while. Etc.
I'm nearing the end of my rope with this whole Training After An Injury garbage.
Thanks to the brilliant wit of my children, though, I have a new plan for tomorrow's run! I typed in a clever joke into my phone's alarm clock :
Q. Why did the chicken lace up her running shoes?
A. Chickens don't wear shoes, nor can they manage laces, dummy. Get your butt out of bed and RUN! If it blows, just be thankful you're higher on the food chain than that chicken.
It's a work in progress....
Any better ideas or jokes?
Posted by Jennifer at 1:06 PM