A few months ago, my outer ankle started to hurt after running. I did what any stubborn, misguided runner does: iced, self-diagnosed and rested for at least 26 hours.

This vicious cycle repeated itself, with varying times of zero pain and more intense pain, until it came to a head during a tempo run. Due to heat and humidity (and probably the fact that I was on the verge of a stress fracture) my recent speedwork had been extremely disheartening. I decided to enlist the help of a faster and extremely agreeable running buddy. We were both attending the same group run and he was nice enough to jump on board with my "how 'bout you pace me for my tempo run?!" plan.

I arrived ahead of the group, to squeeze in an ibuprofen-laden warm-up mile. (once again, I have never claimed to be  terribly intelligent when it comes to running). The plan was to evaluate my level of ankle pain to see if I should go through with the speedy training run.

In my defense, the warm-up didn't actually feel horrible.

The following day was a planned rest day, and the following week would be a cutback one.  I desperately needed to tuck a solid speed session into my marathon training and I had become a master at convincing myself it was just an "achy tendon" that I could run right through.

So, when the rest of the group showed up at the park to run the LBT, I was ready to get it over with run. 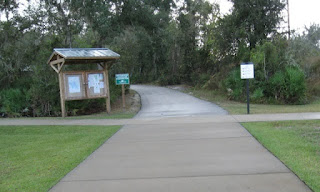 it looks so quiet and not at all terrifying, doesn't it?
There was the usual small talk. We all expressed our mutual disgust over the 80+ degree temps. Combined with the 95% humidity, it was going to be like running through a hilly, tree-filled sauna.
I should have stopped after the first tempo mile. Even at that point, though, I'm pretty sure the damage had been done. The guy was doing such an excellent job with the pacing, though, and we were right at our target pace. I definitely should've called it quits after the second mile. As a runner, I have had my fair share of aches, pains, twinges and niggles. However, this night, on this trail, my ankle was throbbing and screaming at me to make it all go away.
I'll spare you the rest of the details, mostly because they make me look like an even bigger idiot.
After four miles, averaging just under a 7:30mm pace, I came to a dead stop and decided to jog back to my car.
Up until this point, walking had generally not been a problem. Tonight was different. I limped, painfully, to the parking lot and knew. This trail, that speed, my stupidity, the heat...I was done. It was over. My marathon dreams were crumbling and my heart hurt almost as badly as my ankle.
I bypassed the ER (yes. it was bad enough for me to consider going to the hospital) and drove home to shower and evaluate the situation with my husband. As a runner's spouse, he has heard his fair share of complaints about my aches, pains, twinges and niggles. (Lucky man!)
During the night, when I was forced to crawl on my hands and knees, just to get to the bathroom, we both agreed a trip to Urgent Care was in order. The rest is ugly, whiny, painful history.
Lucky for you, this blog hasn't been in existence that long. Should you decide to skim back through the archives to see how the drama unfolded, it shouldn't take up too much of your valuable time.
My return to running has been slow, painful, frustrating and any other icky words you can think of to describe "unpleasant". Something that used to bring me so much joy, bring to mind so many goals and dreams and make me feel so alive has become a tear-inducing, humbling nightmare. (sorry. I'm not much of a sugar-coater)
Over the past couple of days, though, I've cautiously felt like I was starting to turn a corner. Without immediately realizing the significance, I drove out to the same park, to run seven, solo miles on the same trail.
When, by mile five, I had to force myself to slow down, to keep it easy-paced,  I couldn't stop the ridiculous smile. Other than the woodland creatures and creepy shirtless stranger carrying a grapevine (for real), I was all alone but SO relieved and joyful to be feeling like a runner, again. I did a little whoop/holler and finished out my sweaty miles.
Lake Beresford Trail : 1
Me : 1
﻿
Posted by Jennifer at 1:33 PM