If you read yesterday's post you saw I would be easing back into racing with a nice, short event. Holy geez, this was a fun night! 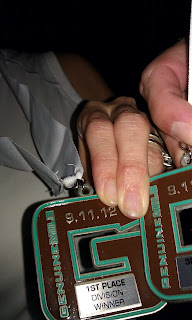 
My in-laws were kind enough to join us, and corral the boys, so The (non-runner) Husband and I could both race. (thanks Grampa & Nana!) My dad and sister were running, too, so my mom, niece, nephew and brother-in-law were also spectating.

Fueling for a night race can be a bit tricky. Luckily, though, I didn't have too many concerns as we'd only be racing for a mile. So, I ate pretty much like I always do, throughout the day. Yes, this means I had my sundae. I wasn't starving before we left the house so I just had some water and a mini Clif bar. (white chocolate macadamia nut. yum)

My dad's been struggling with injuries for an insanely long period of time so he was dropped off at the start line. The Husband, sister and I ran from the finish line, to the start for our warm-up. It was actually a rare, cool, breezy Florida evening. My dumb ankle was a bit achy, but I'd also ran 18 miles over the past two days.

I still had absolutely no idea what to expect for my finishing time. I've just recently been addiing a bit of distance back into my training, but have not taken a single, speedy step in months. I thought The Husband would finish under 7 minutes (I don't know that he even really believed his prediction of 7:50) so I hoped to have a sub-7 finish, as well.

The race was broken down into 10-minute waves. Men's Open division would start, meaning I didn't actually get to race with The Husband. The Women's Open was 10 minutes later...Men's Masters...you get the idea.

There was a lot of excitement, nerves and jokes at the start. All the spectators were lined up along the route or at the finish, so it wasn't a huge group.

Due to the 09/11 date, my friend/race director  had brought a giant flag and promptly designated me "special flag-holder". I agreed to do it, on the condition that I wouldn't have to also sing the National Anthem. As my dumb luck fate would have it, her sound system died and she ended up roping me into singing "The Star Spangled Banner" with her. It was an interesting blend of horrific, moving, sweet and relaxing. 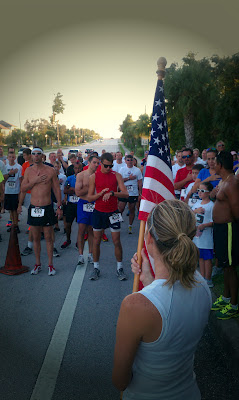 how to take people's focus off the rat's nest on the back of your head :butcher the Natl Anthem!
The speedy men took off and the 10 minutes 'til our start time flew by. I was so happy to be at a start line, again, and even happier to have my sissy beside me. Between her pregnancy and my injury, our 'gether runs have been limited, lately. We treasure the times we do get to sweat with one another, now. 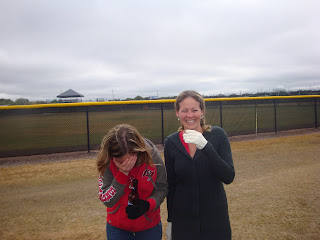 ﻿
we photograph extremely well, together
There wasn't a timing mat, at the start, so I stayed close to the front. I knew at least two of the girls were faster than me, pre-injury, so I didn't have any chance of beating them. When we took off, I stuck with my plan of : control breathing, manage footing and speed up whenever possible.
The course was perfect. It was straight and slightly downhill. We were running into the wind, but it wasn't overpowering.
I was way more calm than I thought I would be. As per usual, once I increased my speed, my ankle didn't hurt a bit. (more on my theory regarding that in a different post)
I got stuck behind a couple ladies but was okay with it as I was unsure of how long I'd be able to maintain my pace, anyway. The first 1/4 mile marker came up and I glanced at my watch for the one and only time during the race. It showed a 6:10 average pace and I was surprised at how easy that was feeling.
A local track coach was just ahead of me. Some kids from her team were taking turns running with and cheering for her, so I totally used them as my pacers. Thanks, guys!
At the half-mile point, I could already see the finish line. My breathing was the only thing giving me trouble. Definitely need to get my cardio back up to speed. (haha. speed. get it? like in a race?)
The clock went from 6:39 to 6:40 as I crossed the finish. I stopped my Garmin, immediately & it also read 6:40. That's pretty rare for the times to match up that well! The results, oddly, show me at 6:48, but everyone I talked to had the same issue. Must've been a glitch.
I was instantly annoyed when I realized how good I felt. That means I could've gone faster, dangit!
I made my way over to our cheering section to hear The Husband's good news. He, the non-runner, had a finishing time of 6:52. "I told you so!" was said aloud, but, "nanny boo-boo, stick your head in doo-doo" was not. (see, I have some restraint)
My sister finished her fastest mile, (Woo hoo!) and we waited to cheer on my generally-hobbling, injured RunnerDad. It was not even a little bit of a surprise when he sped over the line at around 7:10. (Woo hoo!)
Awards-wise, it was good news for me, bad for my sis. All those fast ladies in front of me? They were in her age group. :(
The kids' race followed. My boys insisted I stay far away from them. However, it was dark by that point and I was nervous about them veering out of the closed lane and into traffic. I, and a couple other parents, ran along the side to be Human Shields. When I saw The Littlest starting to fade, I scooched closer to help him along. He zoomed off, in the other direction, and told me to leave him alone. So I did. (I should've totally gotten a medal for restraint, this night)
The Middlest ended up winning, for his first time. He was over-the-moon excited and not even slightly humble. All the kids received cool Fireman's helmets and a medal. It was definitely worth staying up past bedtime. My mom offered to take the boys home while The Husband, my dad and I stayed for awards. (thanks, Mom!) 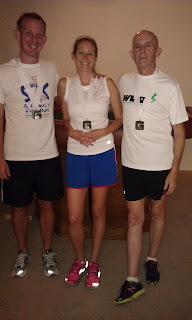 sorry, sissy. No medal, no photo op. (jk, she had already gone home)
I lost count of all the PRs I saw from my running buddies. It was such a fun and rewarding race and I can't wait 'til next year's!
Ever done a one mile race?
What's your favorite distance? ﻿
﻿
﻿
﻿
Posted by Jennifer at 7:00 AM