I try to not be a DOG Runner. I really do.

The night before this race, though, my mind was flip-flopping between the logical, rational goals and the truly delusional. I need to find a balance.

"I'm still fresh off an injury. I need to treat this race as a training run with a goodie bag and free t-shirt."

This was, of course, immediately followed by:

"But if I just want a PR badly enough, I'm sure I can magically run fast enough to achieve it!"

A local, well-established running store puts on a dozen or so races, every year. They never disappoint. The price is pretty average, for a 5k, ($24 for early registrants) and it includes a free, cotton t-shirt. There are usually a ton of great sponsors at the actual event, though.  We make out like bandits, gathering up all the freebies, afterwards. 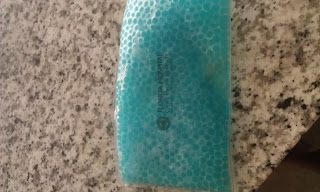 bad picture of one of our more useful freebies. Ice/Heat pack, compliments of Florida Hospital. Score!﻿

Another perk : The Kids' races are free and they also get a mini version of the same cotton shirt, (to keep) and to pin their race bibs (just for show...not chip-timed) to. The races are short and all the kids get a commemorative ribbon. Their excitement over that portion of the morning is well worth the $24 and early drive to the event.

There were over 1700 5k finishers. Even with a 7:30 am start time, the conditions are still pretty warm and humid, this time of year. Their Fall and Winter events bring out even bigger crowds.

Since the injury, it's been taking me at least a full mile to loosen up all the aches and stiffness, every time I run. There wasn't a great route for that anywhere near the race area. I ended up doing a bunch of annoying loops around a park and a dead-end street. Luckily, other people were doing the same thing so I didn't look quite as obnoxious as I felt.

The legs felt pretty okay with an 8:41 warmup mile. I didn't do any strides or really push it, at all. It was just a leg-loosener. The problem was, it was already pretty toasty. I avoided most of the really hot Florida Summer weeks by being forced to run in here : 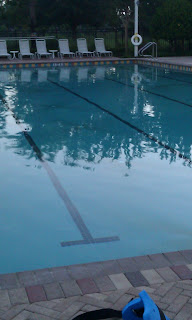 ahhhh
While I have been running on land, again, the past couple of weeks, my body's apparently still a bit of a pansy when it comes to higher temps. So, when we lined up for the National Anthem, after my loopy leg-loosener, I was duh-ripping sweat. Like, fingers sliding off my Garmin's buttons sweaty. I glanced around for someone to commiserate with and noticed everyone else was bone dry. I'm pretty sure one guy was even shivering.
Nice.
We started and I made a pact with myself to not look at my watch. It's never been beneficial during a race. If I see a number that seems too fast, I automatically slow down. If it seems too slow, I get all discouraged and disgusted.
I was hoping to start out fairly conservatively, and speed up when I could. The pace felt do-able, but not something I could maintain for another 3 miles. Warning bells started going off at that particular thought. The whole course runs through a pretty, quiet neighborhood and around a big lake. It's all road...no grass, gravel or sidewalks.
My watch beeped at what I thought was the first mile (foreshadowing) and I felt a little bit less panicky. It had gone by pretty quickly and I wasn't dying. Yet.
Then I noticed I hadn't seen a clock or mile marker. This is highly unusual for Track Shack races. When we finally hit the actual first mile, I realized my watch still had the "virtual partner" setting on, and was just beeping to let me know I was behind my goal pace. Thanks, Jerkwatch.
From that point on, I was a loserbaby. I could not shake the desire to come to a complete stop and walk the rest of the race. In a 5k! My mental game is so far from where it needs to be, right now, it's hideous.
Mile One :  7:08
My second mile is typically slower, in a 5k. (I'm a big fan of positive splits, apparently) In retrospect, I guess I can celebrate the fact that I didn't actually stop running the entire race, because that's ALL I wanted to do.
I swore off future 5ks.
Then I swore off future races, altogether.
I mentally wrote up my online ad to sell my marathon bib.
I wanted to curse at all the people passing me and yell "you're not going faster, I'm just going slower!"
My legs refused to turn over quickly and my brain refused to push them to do so. I am not exaggerating at how horrible this race felt. I know a lot of people aren't a big fan of 5ks, but I've never had this sort of experience with one.
I resigned myself to stop calling this a race, and just think of it as a Tempo run, for training purposes.
Mile Two: 7:22
I wasn't even trying to do the math to predict my finishing time. My only, pathetic, consolation was that the 10+ miles I was planning to run after this could be slower. You can imagine what a boost that particular thought was...
My watch was a bit off, so I knew it'd read the course longer than 3.10 miles. Still, when it beeped at the 3rd mile, I kicked it. I was grateful to be able to find another gear and just pushed out any other thoughts. I usually try to find my family and give them a smile or wave, but all I had eyes for was that finish line.
Mile Three: 7:52 (ugh)
0.19, according to Garmin, 6:17 pace
Total : 23:33 Not a personal worst, far from my best, and three minutes faster than my time from the same race when I ran it in 2010. So, I guess there's that...
5th out of 135 women 35-39
206 out of 1703 runners
In other, more exciting news, my family member/friend ran her best 5k, ever!! Go Kristi-Anne!!
I found The husband, boys and in-laws and we grabbed our fill of bananas, granola bars, waters and chocolate milk. One of us may or may not have indulged in a free, organic, locally brewed beer. At 8 am.
The boys both ran the 400m(ish) race, with the other kids, with giant smiles and speedy feet. The Middlest is really enjoying racing, lately!
The rest of the family headed home and I dragged my sweat-soaked self to my next destination to tack on a long run and call it a (difficult) day. I'll spare you the whining details about that. For now.