It wasn't my intent to leave this half-written story for so long. Turned out to be really good timing, though, to have it ready to post today! If you don't know why, Google when The Boston Marathon is run. (or get your head out of the hole you have it buried in)

At no point during the four hours and 5 minutes I spent running The 2012 Jacksonville Bank Marathon did I think "I will learn to LOVE this experience for all it will teach me". But I totally should have. Because, without that mess of a race, I'm fairly certain I would not have run a Boston Qualifying marathon two months later. It forced me to go back to the drawing board and make some physical and mental adjustments.

I won't drag us all back into the December Debacle, though. I'd just like to share what I did for my 26.2 Miles on February 17th, 'cause...well...it seemed to work out okay. 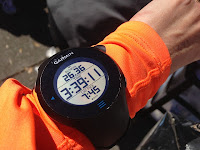 Nutrition & Fueling: I belive it was Erin who shared some links regarding race day eating, a couple of months back. Until I started running long distances, I'd never had a problem with my intestines misbehaving. For example : I once ate a large burrito, enchilada, refried beans and rice about an hour before setting out for an evening run. (p.s. : that little tidbit falls under the "do as I say, not as I do" category, obvs)

Once I started spending more than 90 minutes on my feet, though, my previously brag-worthy, iron stomach turned into a big, dumb jerk. Through a lot of (mostly failed) experimenting and the aforementioned new fueling plans I was finally cautiously optimistic about not completely falling apart, GI-wise, during the race.

I ate less than 1/2 of a plain bagel at about 4:30 am, while waiting downstairs for my friends to join me on the shuttle. There ended up being some clock discrepancies, though. I waited for a couple minutes before boarding the nearest bus. (hooray for heated transportation!! It was right around 32 degrees) I sipped water, on and off, throughout the morning, but didn't take in any other calories. 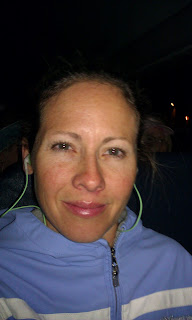 $2 jacket from Goodwill, warm bus, very special self portrait
I'd cut up some Shot Bloks into easier-to-gnaw pieces and stuffed them into a ziploc. Those, plus one Clif gel would be my race fuel. I decided not to carry a water bottle, as there were plentiful stops along the course. Also, with the cold weather, I didn't see myself needing a ton of hydration.
I had a few pieces of the Bloks every 45 minutes, saving the gel for the final few miles. The amount and choices were happily perfect! There were a couple moments where I felt dry-mouthed and wished for water, but it didn't take long before I had cups available to me.
The only other, minor problem was the cold + chewy fuel combo. My face was so cold, it was really hard to chew those gooey bits. I'm sure the specatators were treated to a really special show every time I fought through that process. I've checked the race day photos and have yet to see any depicting that hideous scene. Either the photographers didn't catch it or they're kind editors.
The Early Miles: I'd made myself some little pace stickers, but they ended up under my arm warmers. I quickly realized they were going to be more of an annoyance than anything, so I kinda forgot about them. (until they pulled arm hairs. Then I remembered them)
I've gotten really good at starting longer races nice and easy. This one was no exception. The only glitch was, again, the cold. We'd been waiting in the corral for so long, that I could no longer feel my feet. It's real tricky to run a pace based on feel when you can't, stinking feel anything. 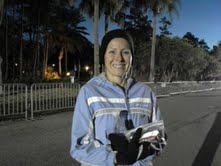 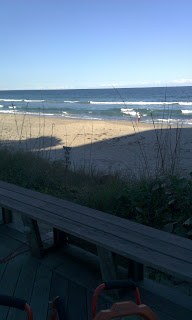 looks so harmless, doesn't it?
I live in Florida. I've run on sand and dealt with chillier temps and wind, near the water. I was unprepared, however, for the endless, sand-filled gusts that were attacking us. While I knew that pushing hard and keeping my effort steady was the way to go, I was already realizing the unexpected toll it was going to take on my legs, later in the race.
Miles 7-9 were supposed to be at that 7:50 pace, but the sand slowed me down to 8:05, 8:24 & 8:11. I was already a bit ahead of where I needed to be to qualify for Boston, but I'd become attached to the idea of staying ahead of that 3:35 group. (I still know I'm fully capable of a 3:30 marathon. There. I've said it.) Moving on...
Leaving the beach was blissful, but I had to rally to shake of the fatigue those wind-filled, sandy miles had left me with. Luckily, neighborhood/crowd support was in full force in that area of Jacksonville. I maintained my form for my new, adoring fans.
Mile 10 was a comfortable 7:52. The next stretch was a bit quieter, specator-wise. I was happy to have completed double digits, but was still too far away from the halfway point to really feel comfortable, yet. I ended up zoning out, a bit, as is my habit and ran 11-13 in 8:01, 8:06 & 8:07. I crossed the 13.1 mat ahead of my goal, but just barely.
I was still feeling infinitely better than I had been in the December marathon. I also decided it was time to turn off my brain, for a bit, as it was starting to let some negativity creep in. The ipod was switched on and I took a quick, mental break.
The 3:35 group passed me, and I was okay with that. They were still in sight. I knew I was slowing, but it wasn't considerable and I knew I had some time banked. Miles 14-16 : 8:04, 8:06, 8:11, 8:23.
uh-oh. Double-digits left to run, and my pace was creeping up. When mile 17 clicked off at 8:30, I had to start working so much harder, mentally, than I had the entire race. I reminded myself that I still felt good. (I really did) I was fatigued, but not sore. My stomach issues were non-existent, the sun was shining and the weather was absolutely gorgeous.
I peeled off my gloves & ear warmers with the hopes that I'd see The Husband or other friends, along the course and could toss them.
I glanced at my watch and saw an 8:4x, right after that 17th mile. UGGGHHH!!
I came around a corner and had caught up to a handful of marathoners (with the 1/2 marathon & relay being on the same course, you never know how fresh-legged the folks around you are) and an awesome realization hit me. I recognized the running form directly in front of me. It was a friend from my running group with whom I am extremely comfortable following.
That ended up being the relief I never knew I needed, but that showed up anyway. Mile 18: 8:17.
We wordlessly took turns leading, with brief water stop walks thrown in. He was starving and fading and I was running a marathon faster than I ever had. Not the best setup for teamwork, but it worked for us. While the next few miles were slower than I wanted, I fully believe they would've been even slower had I not been running with Josh.
Miles 19-22: 8:32, 8:32, 8:28, 8:35
By this time, I'd lost a glove, so I tossed the rest of my gear. (very sad about the loss of my favorite arm warmers, btw). I took my final gel, washed it down with some freezing water and just. held. on.
Around this point, I took my turn in the lead and Josh faded back. He never passed, again, but I knew he was close. I also knew I just needed to keep my remaining miles under 9 minutes/mile to finish under 3:40.
Typing this now, that seems SO easy! That morning, though, I was feeling tired enough to be ready to actually fall asleep. On my feet. It's hard to describe that type of fatigue, but it took everything I had, mentally and physically, to push through it. I drew on some of the thoughts I described in this post and kept telling myself it would be over, soon.
It felt like I was pushing hard enough to see 7:00 on that trusty ol' Garmin, but instead the final miles were pounded out in : 8:42, 8:39, 8:48 & 8:49.
There was a bridge. Hard doesn't begin to describe that climb during the last mile. There was panic at getting that far and seeing 3:4x on the finish clock. While that would have been a huge PR, for me, it was definitely not what I wanted to see. I also lost an earbud to the wind and was momentarily devastated at the lack of music drowning out my "Let's STOP RUNNING!" thoughts. Coming off the bridge, though, I saw two beautiful sights :
1. The Finish Line, adorned with pink balloons.
2. The girl in front of me pumping her fist across that Finish Line.
Why was that was beautiful? Because I knew she was in my age group and that she had just qualified for Boston.
I was close enough to see that I was going to do the same.
The last .36 (by my watch) : 7:45 pace (2:48)
I stumbled across and crashed into my poor husband who was trying to record the moment on his phone. Needless to say, that didn't work out so well, thanks to my ill-timed attack. I took for granted the fact that he, my sissy and my friends would be waiting. I'd completely forgotten the setup at this race that doesn't allow family/friends to be at the actual finish. Those sneaky guys had gone out of their way to be where they were. I'm so thankful, but totally not surprised. 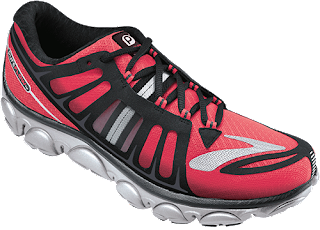 I still love them
The bottom of my foot hurt pretty badly, as seems to be the norm when I wear the Pure Flows. The good they do outweighs that minor problem, though, so I stand by my decision to wear them for the marathon. Some overly attentive medics (maybe they read this post?) immediately showered me with ice and kind attention.
I was dazed and unable to form complete sentences, but I was done. Not only was I done, but I had shaved off almost 19 minutes from my best marathon time and had succeeded in qualifying for The Boston Marathon.
The day was still so beautiful, so I wasn't even a sweaty mess. I stretched...painfully, and grabbed my drop bag. Catching up with everyone was frenzied but ecstatic. Phone calls were made, hugs were plentiful and I even became BFs with Joan Benoit Samuelson! (well...we waved at each other, anyway)
There was quite a bit of re-fueling, that day, in the form of water, free beer, bananas, an entire pizza and a milkshake. In reality, I had no appetite. My brain tells me I need to replenish, though, so I do it. I actually didn't have much of an appetite for several days, later. 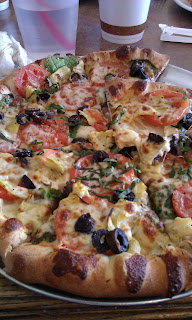 One marathon = one pizza 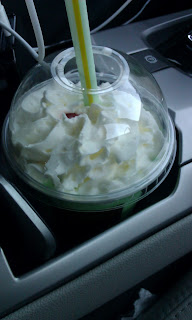 looked so tasty! Only managed a few sips. :(
P.S. I'm currently watching the race I hope to be running on this same day, next year. That's about the coolest distraction, ever, right now. ;)
For now, this is what I've got for you. I've had so much more to share, since then, but wanted to get this out, first. Thank you for waiting and reading!! ﻿
﻿
﻿
﻿
Posted by Jennifer at 8:45 AM 6 comments: