The first two parts of My First Marathon Recap can be found here and here. This post is more about the actual race setup and weekend. Fun to learn about and especially useful for people like this sweet girl who is planning to conquer this actual marathon!

I have a dangerous habit of RRUI (Race Registering Under the Influence). The kids get tucked in bed, lunches made, dishes done ignored and it's time to settle down at the ol' PC to start scanning race calendars. More often than not, sleep deprivation, paired with an adult beverage, leads to some sketchy decisions and morning-after panic. This marathon, though, was carefully chosen and researched. 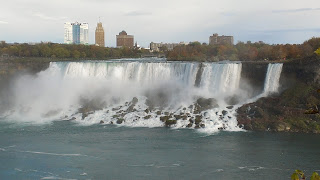 Not a tough sell with a finish line like this

The Niagara Falls International Marathon options include a 5k, 10k, half marathon, full marathon AND marathon relay. Sounds like a cluster, huh? All events are capped at reasonable numbers, though, (1,500 for the full) and it's been held, annually for many years.

The Site:
The website could be better. Info is found in odd spots and there are entire omissions (race results, for example). Beyond that, though, they do provide a ton of links for participating hotels and transportation. This was perfect for out-of-towners, like ourselves.

Travel:
We went with a shuttle service that picked us up from the airport, stopped and waited for us at customs and then took us directly to our hotel. It was cheaper and way less stressful than renting a vehicle for our family of five. Every rep we spoke to, including our driver, was extremely friendly and helpful.

Locale:
We checked into the hotel and went to grab a late lunch. This was when we discovered the big Niagara Falls Downer. Being the vacation spot it is, everything was waaayyy overpriced. Convenient? Yes. Restaurants, Casinos and shops were plentiful and all within walking distance. However, due to all the tourists and crazy Canadian sales taxes, a plate of pancakes at IHOP was $20. 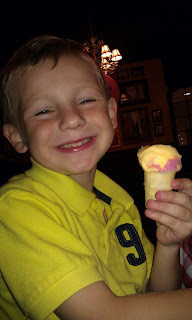 the free ice cream cones made everyone happy, though
Health & Fitness Expo/Packet Pickup:
With some free time after our mediocre-tasting, $100 lunch, (yeah for vacation!) we decided to hit up the expo. Note : For this race, go to the expo Friday. Avoid going Saturday at all costs. When my sister popped into Canada, Saturday, for her surprise visit, we went back to the expo to get the stuff for her race. The lack of lines and quiet excitement were replaced with tons of people and claustrophobia-inducing chaos. Blech.
The bib pickup was quick and painless. Find your bib # on the wall, get in the appropriate, well-marked line and get your color-coded bib, complete with name. (I love personalized bibs!!) You then walk through a little hallway to activate your chip and proceed into the expo.
If you're running in the Full Marathon, you have to show your I.D. or passport at the expo to actually get a bib. You're  rewarded with a cute, red, maple leaf stamp on your hand.
I carried my first marathon bib as though it were a precious newborn kitten as we walked around to check out the different vendors. (No! Don't put it in that bag! You might scrunch it!) There were a lot of different companies and plenty of free samples and giveaways. For the small-ish number of entrants, it was a pretty well-stocked expo. Girls were even walking around passing out tiny cookies with the race logo on them. 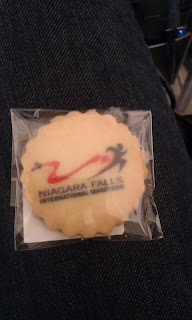 the boys were SO pleased when I told them these were now "souvenirs" and mustn't be eaten
Marathoners were given giant, clear goody bags (as they'd double as drop bags for the race). I believe all other distances got standard-sized bags. Each distance featured a completely different shirt, too. Mine was long-sleeved and neon yellow. My sister's 10k one is short-sleeved and black. None of the shirts have any sponsor logos on them, either. This wasn't something I'd seen before and none of the volunteers seemed to be able to explain the reason for this.
We killed at least an hour at the expo, stopped by The Falls for a few quick photos and then headed back to the hotel to see what treasures that giant bag contained. 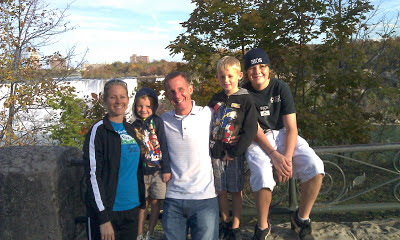 yes, I had a ratty ponytail. No, I wasn't even running that day. 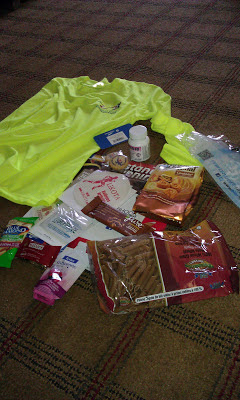 goody bag delights displayed on sensibly patterned hotel room carpet
That's my fancy shirt in the upper left. There was also a full (not sample) sized bag of whole wheat pasta and totally addicting Werther's Caramelts. It also included some tasty bars, a snack pack of almonds, liquid tea mix, biofreeze, and a ton of the standard race flyer, coupons, pens, etc.
It was a nice assortment, for sure. (my sister got all the same stuff in her 10k bag, too)
Race Weekend Extras:
Saturday morning held an opportunity for runners, and their families, to get together for a short run. This is followed by a (free!) breakfast at Planet Hollywood. I ended up skipping the run, as it was rainy and I didn't want to get my marathon shoes soggy. We did, however, walk the mile (in beautifully cold weather) to the restaurant for the group meal.
The volunteers who'd set it up were so friendly and accommodating. The race director was there, as well, and seemed more than happy to be answering all the questions runners had for him. There was a well-stocked spread of fresh bagels (assorted varieties), cream cheese, butter, peanut butter, tons of muffins, bananas, coffee, juices, waters, hot chocolate and teas.
Bonus : Planet Hollywood was *just* close enough to the US Border that our cell phones had reception!
Before we left, the volunteers insisted we load up with extra goodies. This turned out to be perfect, as the bagel I stashed in my pocket ended up being my race-day breakfast. Upon their urging, the boys each grabbed another bottle of juice and we took a leisurely, scenic walk back to the hotel to enjoy the indoor, heated pool. 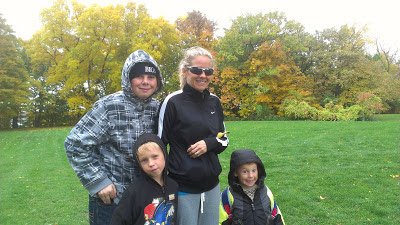 Bagel in pocket: yes. Banana nestled under arm: check. Ratty ponytail: mmm hmmm
One thing lacking from the expo and/or goody bags : any sort of written instructions. Most other races I've participated in, especially half-marathons, provide you with some sort of last-minute or race day reminders. There was nothing. We had to rely on the website. With our spotty internet access, this proved to be tricky and increased my stress levels.
My advice : print as much info as you'll need before you go.
Race Day :
The marathon & marathon relay runners get bussed (from one spot) to the US starting line. All the other races actually start in Canada and every distance shares the same, scenic finish line. Of course, if you're already in the US, you can simply drive to the Albright-Knox Art Gallery.
I'm pretty sure there was no parking, though, so you'd have to be dropped off. I'm also sure there was no race day packet pickup, so that'd need to be done the day before, as well.
Due to the unusual setup, the buses leave between 7:00-7:45 am, but the race doesn't actually start until 10:00 am. They need to allow time to get through customs and get everyone transported on time. When it runs smoothly, though, this can mean waiting for over two hours for the race to begin. Not fun, but it could've been worse.
Plus : We were able to wait inside the art gallery (no standing outside shivering!)
Minus : We were not allowed to bring food or drinks in there
Plus: Indoor bathrooms!
Minus: Three stalls (I later learned there were also a ton of port-o-potties outdoors)
Plus: Comfy seats in the auditorium/holding area
Minus: I fell asleep, briefly
Plus: There was some really lovely artwork on display
Minus: There was also some really hideous, lewd pieces
About 15 minutes before the start, I made my way outside to the buses where you could drop your bags. There were quite a few and they were designated by bib numbers. The line was short and efficient. I was able to wear my (ugly) jacket right 'til the end, too.
The Course:
The course was well marked, but there weren't really very many opportunities to get lost, anyway. Most roads were completely closed for the runners. There were never any traffic issues, so it must've been well-controlled. A majority of the race is run on a scenic parkway, in Canada. That's also closed to traffic for the race.
The water/Cytomax stops were plentiful and well-manned. I detailed that a bit more in the 2nd part of my recap. I noticed some port-o-potties on the course, but have no idea how many or where they were, exactly. Had I needed one, at some point, I'm sure I would've paid more attention to this detail.
There were lots of spectators in the first few miles, but that was all through downtown Buffalo. Once we got into the more nature-ish areas, it got a bit lonely.
The Finish/After Party:
The finish line was jam-packed with excited spectators. That, combined with the loud music and announcer made it very cool. I was quickly given a medal, shiny blankie and water bottle. The advertised "bag of food" was nowhere to be found. Boo.
I didn't see anyone else walking around with them, either, so I don't think I just missed the table. I'm pretty sure I saw a table with a small number of bananas and granola bars, but nothing stood out as : Come Get Your Tasty Post-Race Food, Here!
I had no appetite, anyway, so I didn't really care, at that point. My sole focus was on finding ice for my rapidly swelling left foot.
I hobbled over to the Medic Tent and was greeted with concerned-looking paramedics. I quickly assured them that I was fine and just needed some ice.
"Are you injured?" one asked. "No, no...my foot's just sore and I wanted to put some ice on it." I responded.
They directed me to the massage tent and told me I could get ice for "that sort of thing" there.
I limped aalll the way back to that tent and repeated my request. The man directed me to some young volunteers, in the back, who were instructed to give me a "handful of ice" to wrap up in my foil blankie.
One girl proceeded to open a cooler (full of ice packs) to show me that all their ice cubes were nearly melted.
It was, at this point, that I offered to buy a handful of ice from them. I also made the (apparently crazy) suggestion that they just let me use one of their ice packs. The girls assured me that they couldn't possibly do either and watched me shuffle back out of the tent.
Eventually, my husband went back to the medic tent and used his no-nonsense tone with them. I'm way too nice, in these situations. One of the guys sneakily slipped me an ice pack (for real. it was like a behind-the-tent, shady drug deal) and told me to tell anyone that asked that I'd found it on the ground.
My advice: BYOI or don't swell. Post-race ice is just simply too risky and precious to count on as an option.
I hope I've given off the impression that this race is awesome and that I'd recommend it 100%. I'm sure I'm slightly biased, as it was such a big deal to me. Beyond that, though, it really did provide for an amazing experience and every part we encountered (not including the Ice Fiasco) ran like clockwork. 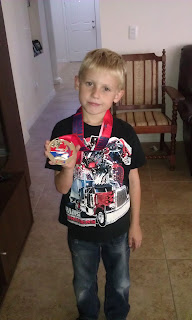