Okay. Don't worry. It was all actually very benign.

Also, in non-running related news : The Littlest broke my heart, just a little, yesterday. I have grown scarily very attached to his crazy, blondie, softy curls. 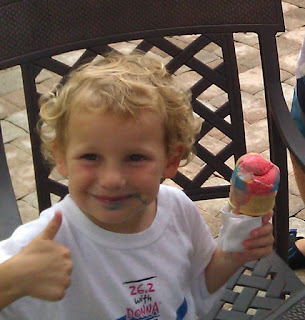 the blue mustache and beard? notsomuch
So, yesterday, when he told me he just wanted his hair to be "straight and sleek" I had to oblige. ﻿ 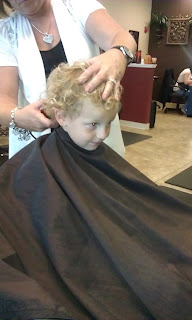 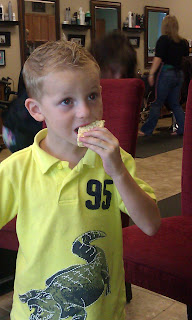 straight and sleek, indeed
I also read a new and timely (for me) Runner's World article about The Perfect Taper. One of the workouts described fit perfectly into my plans to run a 6 (or so) mile run, in the evening. It involves marathon-specific speed maintenance. The key is to keep the mileage and pace within an reasonable realm.
Before I left the house, I set up my Garmin to do a custom workout for this run. One mile warmup, followed by one mile with a pace approximately 30 seconds faster than my mgp (marathon goal pace). The next mile was to be 30 seconds slower than mgp. I repeated that set and then planned to finish off the run at an easy pace.
It's not often that I'm able to run in the evening. That, combined with being able to meet up with my running group and a new route made me just plain giddy. Unfortunately, my giddiness translated to erratic button-pushing on my watch, at the start. I have no idea what happened to the custom workout I painstakingly set up AND it didn't even beep at the mile splits. I was still able to see what mile I was at, but had no idea what my pace was.
The first mile was a bit faster than what I'd normally consider a "warmup". (see giddy factors, above) I was able to reel it in, though, and happened to catch on to the Garmin Glitch right at about 1.01. So, I sped up for my first, faster mile. It felt way too fast for a reason. I was able to check the splits, after I got home and saw it was almost 30 seconds faster than I'd planned. Oops.
The rest of the miles actually ended up being right on target. (go me!) However, my lovely, easy-paced cooldown was not really that, at all. I hadn't planned ahead for all this willy-nilly, in the dark running. No flashlight, no visible running buddies ahead or behind me and lots of cars with glaring headlights forced my pace to quicken. I finally stumbled on a (smart) runner with a headlamp and kept pace and conversation with him 'til we got back to the parking lot.
I liked the new workout and the course, but my legs were uncomfortably sore after the hilly 6.5 miles. The Husband called with a Shower Curtain Emergency (apparently those exist?) so I had to make a quick, sweaty, stinky, red-faced stop at Target before going home.
Walking in, I realized I desperately needed to stretch my achy muscles. I made a beeline for the bathroom and was happy to find the handicapped stall empty.
Gross? Probably. Necessary: Yep. Plus, I got to incorporate some new, germ-avoidance stretches into my routine! 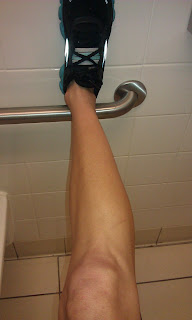 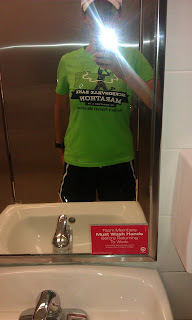 could've been worse. I could've chosen Wal-Mart.
Quick recap:
Any new stuff happening for you this week?
Which was more weird : stretching in the stall or taking pics of it?
﻿
﻿
﻿
﻿