I left the menfolk at home, sleeping, and drove to a local, high school, Cross Country Track Meet. It was my first event of that kind, so I took some cool pictures. Instead of posting them, though, I accidently deleted them.

That would be my second "Win" of the day.

My first victory happened at the Track Meet! I sprinted, as fast as I safely could, through the wet grass and totally got there first!! No, not the finish line. I made it to the one accessible bathroom with only seconds to spare. Go me!!

While at the bathroom, I made a startling discovery!

It was about 5 minutes prior to the start of the CC 5k and there wasn't a single person lined up for the bathroom. Whaa? Do high-schoolers not get pre-race jitters? Are they forbidden from using the facilities? At what age do racers go from meandering around the track, before the start, to frantically lining up in front of filthy porta potties for the 6th time that morning?

So, as you may have deduced, I was not racing. I was a Course Marshal. That's a fancy term for "Person who claps, cheers, gets bitten by mosquitoes, and points towards a turn on the course". I really liked seeing the (full bladdered?) kids gutting it out for their schools. I even teared up at a few of them who were so obviously struggling and refused to stop. Very inspiring.

They were red-faced, dripping sweat and working hard to compensate for the heat, even at 8:00 am. This did not bode well for the long run I had planned, for myself...(foreshadowing)

I had to rush out, before awards, to meet my guys for soccer. The middlest wasn't feeling great, though, and ended up doing a lot more of this, than kicking the ball : 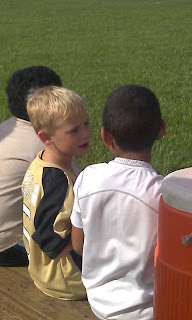 socializing = team spirit...or something
While at the game, I was trying to ignore the fact that the temperature had risen to well over 85 degrees. There was no breeze and the humidity was typical. The Husband was less than pleased to be dropping me off, in those conditions, to run 16 miles around our little city.
Timing-wise, it was, unfortunately, the only time I could squeeze this workout in. And, with it being my last long run before the marathon, it needed to happen.
In my defense, I was well-hydrated, dressed appropriately and had no trouble walking or cutting the run short, if absolutely necessary. I also agreed to bring my phone, which eased his mind immensely.
He and the boys came to my aid, about 10 miles in. They were kind enough to bring smiles, cheers, icy cold water for my handheld bottle, and an equally cold cloth. The Littlest's insistence that I "just get in the car" was pretty darned tempting, too.  ﻿

Since going rogue, I don't really have an actual "taper" planned. I suppose that's what will happen, though, now. No more long runs, very little speedwork, lots of rest, waiting for phantom aches and pains and maniacally stressing about the marathon. That should cover it.

How was/is your Saturday?