In retrospect, I may've been keeping that whole "end of the world" thing in my back pocket when I came up with this Adventrageous plan. You know...I think I thought there was a decent chance I may not have to actually have to come up with any more posts after 12-21.

Today's Topic: Runners are crazy. As a runner or even person who knows a runner, I'm pretty sure this statement has come up before. This isn't a groundbreaking discovery. I'm not the first person to ackowledge this, nor will I be the last.

The whole "please let me pay someone to let me run 26.2 miles all at once" issue, aside, sometimes runners think things like this are a good idea. If you don't feel like clicking on the link, here's how my latest running adventure went down :

There was a scheduled Running Group meetup that started at 11:30 pm. It was just over 30 degrees F, which, in Florida terms, is equivalent to sub-zero. My dad, sister, friend and I bundled up and ran from my house to the meetup. (because simply running 3 miles, with the group, would not have been enough weirdness?)

The runners who showed up were grumbling about how cold and late it was, but had obviously not been forced/threatened to be there. This means, deep down, we were all pretty darned giddy about the prospect.

As with most other run, we set off, in small groups, with no fanfare. It was a clear night so the moon, stars and neighborhood Christmas lights were highly visible and beautiful to see. The quiet stillness of the time of day (night?) allowed me to hear snippets of panting conversations from the 30 or so other running friends circling the route.

My own chatter was endless.

In August of 2011, my dad took me as his guest to my very first run with this group. It was a 5 am run, on the same route, so the scene looked very similar. So much time has passed since I've been able to run, with my dad, in the dark that I couldn't seem to shut up. My dad's still re-building his cardio so he wasn't quite as chatty as me. Rest assured I babbled on and on enough to cover both of us.

We finished the route and I was feeling so energized and happy, that I made a snap decision to zip back out for a self-timed, speedy mile while everyone else finished up. At midnight. People-dodging and aching lungs (have I mentioned it was cold?!) forced me to cut it off at a 1/2 mile, but it felt so good to run fast.

We chatted, in the cold, for a little longer and then the four of us headed back to my house, as there were people waiting on their crazy runners. 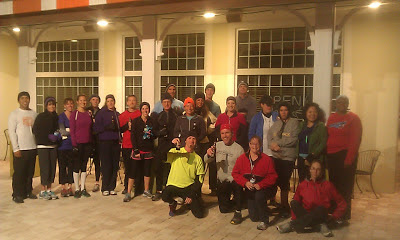 some runners wisely rewarded themselves with beers
Fun, happy, crazy times. Just think...if I weren't a runner, I'd have no reason to be outside, in the cold, wheezing and sweating at midnight!
Today's share: Gracie is one of those naturally talented, extremely fast runners who you're not allowed to be jealous of because she's also incredibly humble. Sucks, huh? I get inspired by her writing and am in awe of her artistic talent and fashion sense. I'm pretty sure people aren't allowed to be so multi-talented, actually.
I hope you'll visit her blog. She's currently on a bit of a running hiatus (other than the possibly ill-timed 10 miler, recently) and can probably use some new readers/encouragement. ﻿
What sort of crazy have you recently involved yourself in? ﻿
Posted by Jennifer at 12:49 PM