When we left off the drawn-out Jacksonville Bank Marathon story, we were cruising past the halfway point of the race...

This portion of the race, for me, is pretty much an ugly blur. Unfortunately, for you, that's about the way you'll feel about his Chapter, as well.

I'll keep it brief and painless, though, which is the exact opposite of the description of miles 13-21 of that marathon.

Not seeing the people I was expecting to see, at mile 13 (14, 15, 16 or 17) was more of a letdown than I thought it would be. I hadn't realized how dependent I'd become on having someone else to run with, until it became clear that wasn't going to happen. I had my music to keep my spirits up and plenty of GUs and fluids to keep me fueled. While maintaining my goal pace was becoming more and more of a challenge, there wasn't anything physically holding me back, I realized.

Right around the time that I was mentally rallying myself back into a decent mood, my body decided to attack me. 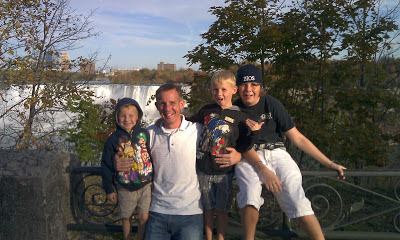 I live with four males. While totally loveable, they are pretty darned gross, most of the time, and I've had to learn to just roll with it. That having been said, I still do my best to maintain my "ladylike" status. This means you'll have to let your imagination take over, in lieu of me actually describing what happened to me during those miles. Hint : Whatever you're thinking...bump it up a couple notches on the  "Oh. my. gosh." scale.

There was seemingly nothing I could do to remedy what was happening. It was so hideous, so miserable and there seemed to be no end in sight. Naturally, my pace suffered. The real nails in the BQ coffin, though, were the two, looonnng, port-a-potty stops. I have never needed to stop for a bathroom break, in any race. I'm sure there's a skill to it that I simply don't posess. Even opening and closing the door, sweaty and shaking, took forever!

For days leading up to the race, one of my goals had been to not let the 3:45 pace group pass me, at any point. My strategy, then, turned into : Hope the bathroom stop is timed right so that they pass while I'm in there and I don't have to witness it.

Instead, they jauntily flew by me right after I hobbled back out onto the course. I said an extremely inappropriate word (s?) and knew I had zero chance of catching, much less passing, those perky jerks.

When I finally saw The Husband, at mile 18, I couldn't even manage a wave or smile. I was so glad to see him, but didn't know how else to convey how very wrong everything had gone since the last time he'd seen me.

I had many, vivid fantasies of dropping out of that stupid race, during those horrific miles. I felt utterly alone, embarassed, defeated, disgusting and overwhelmingly exhausted. I couldn't even manage to keep more than a sip of water in me, at a time. The worst part, though, was that the rest of my body, felt fine. My legs were still strong. My feet still longed to race. 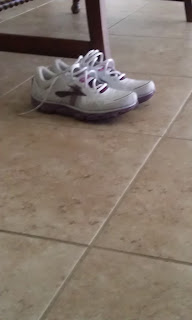 these poor shoes did their best to carry me
Upon reflection, I'm still not really sure why I didn't just DNF. I had already mentally sworn off  running in Florida, marathons and/or racing any distances over one mile, by that point.

Maybe I was subconsciously waiting for the excitement still yet to come...