Only 3 more days of Adventrageous. My gift to all of you will be No More Daily Posting.
You're welcome.


Chapter Four: The Aftermath
I drank some cold water and got quick recaps on how the half and full had gone for my peeps who'd already finished.
If you're reading this and know the people who were there, you already know everyone's results. If you're a reader who doesn't know those people, you probably don't care. Thus, we'll move on with wrapping up my story.
I felt awful for finishing in such a crappy, lethargic mood. The Husband, my sister and her in-laws had all been waiting to cheer me on. I did my best to smile and not look like a total jerk. It's unlikely that I was successful with that, but I did make an effort.

my attempt at "chipper"
The Husband walked with me over to the medical tent to get some bandaids. They had me stand very still while they sprayed the biggest scrapes with some antiseptic junk. One medic asked if I wanted a banana and a few seconds later I had one, in hand. While they were trying to clean dirt and road bits out of me I was apologizing over and over for how disgusting I was and thanking them repeatedly.
Suddenly I couldn't figure out if my eyes were open or closed. As I was trying to decipher this new development, I managed to wheeze "dizzzzzy"...or something like that. I was plopped in a chair and ice bags were strategically placed. Turns out it's not healthy to run for hours then stand, completely still, in the sunshine.
So, that was pretty cool, too.
My sister wheeled her stroller, complete with my lovely niece, into the public restroom with me when I was all bandaged and could stand again. She was unlucky enough to get to hear me ramble on, completely without filter, about the race. Here's how the restroom scene broke down :
Good news: I'd packed an entire change of clothes and one of these magical delights! I can still vividly recall the relief I felt after peeling off my dirty stuff and replacing it all with clean, dry, non-matching items.
Bad news: I experienced another, new (to me) marathon treat! My foot cramped and deformed itself, so badly, that I almost screamed and couldn't figure out how to fix it. Holding onto bathroom stall walls, staring at your newly redesigned, throbbing, foot is every bit as fun as it sounds.
Good news: My sissy reached under the door to save the day. She massaged that dirty old thing 'til it looked human, again, and I could manage to get a sock on it. (thank you, again, sissy!)
We re-joined our group, in the middle of the field, to cheer on the other finishers. Everyone got to share their tales while we stretched and wished it wasn't getting so darned hot. Then, right after the 5-hour mark, the guy with the microphone announced that they'd run out of medals.
This racing company has a good and long-standing reputation, and I hope it stays that way. For real, though. How do you run out of medals? Their excuse was that they'd thought more people would drop out, due to the heat...
This meant the poor people who'd been running the longest AND in the most heat, were going to be sent home bling-less. Realizing we had three first-timers in our group, the decision was made to meet them at the finish line and give them our medals. Only after I'd happily passed mine on to my running friend, did I realize it was pretty blood-splattered. (sorry, Mike!)
When everyone was done, we went out to try to refuel, together. I had zero appetite, but enjoyed the company immensely. 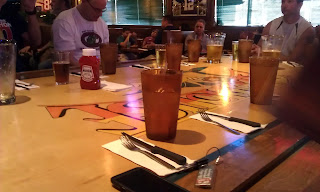 beers and waters, all around 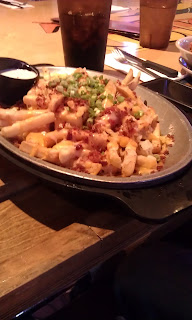 managed a few loaded fries
Went home.
Crashed.
Hobbled around the next day.
blah, blah, blah.
I'm still not in a real "zen" place regarding this race, so I'll keep my current thoughts to myself, for now.
Thank you, anyone who was there to support me, that day.
Thank you to anyone else who thought of me, that day, and/or read this whole saga. I am grateful for an outlet to recap all that mess and especially thankful that anyone took the time to re-live it, with me.
﻿
﻿
﻿
Posted by Jennifer at 2:39 PM