I've never been fearful when it comes to running. Once I shocked myself by learning I could run a whole half-mile, without stopping, I rarely looked back.

Yes, I have butterflies the night before a morning of Speedwork.

I also have to soothe myself with key rituals to prepare for a long run or new race.

I am definitely not without some normal, healthy realizations of my limits. However, when it comes to lacing up and setting out for a run, there is very little that gives me pause.

Sinus headaches, groin pain, tight calves, nausea, rain, SNOW...these have all faced me before a run and I haven't given it a second thought. 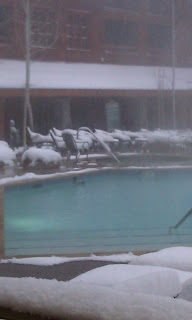 Granted, this is the view from the treadmill I was using, while the snow was falling. Kinda cheated, but I did run through the actual snow to reach said treadmill.

﻿
If you're a runner, this is not likely going to surprise you. You're probably thinking "Duh." (If you have that sort of coolness in your vernacular). What surprised me, though, is my level of near-paralyzing fear at even attempting a fast walk during this period of healing through a stress fracture.

I've referenced this post before, but it's worth repeating. It's long, but I definitely recommend bookmarking it. In it, Camille outlines 2 very simple tests for determining if your injury has healed enough to attempt small bursts of running, again.

1. Palpating the area (the touch test). Like any two-year-old injured runner, I could not keep my hands off that stupid bone. I poked, rubbed, massaged, patted that stupid sore spot more times than I'd like to count. It was like a magnet! This test has been, gradually, passed but I was still terrified to try the other. Cue ominous music...

2. The Hop Test. Three little words, I'd tell myself. I'd try to re-assure myself any toddler can and will do this, on command. Just balance on that injured leg, let go of the wall...no. seriously...let. go. of. the. wall. What the heck is wrong with you?! Why won't you *&$)%*#)ing let go of the wall?! (My inner conversations can get a little rough) Something that's normally so benign was so far outside of my realm of comfort, it was ridiculous.

After several attempts at very successful, pain-free walks (outside! in running shoes!) I decided it was time to put that leg down (gingerly) and let go of the stupid wall.

And I did. I hopped. Then I hopped some more. Then tears filled my eyes until I was afraid I was going to fall over. The tears weren't due to pain. They blinded me when I realized the total lack, thereof. 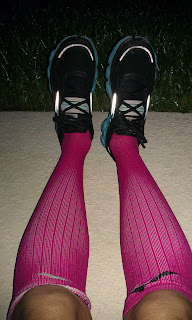 I'll probably get judgement for what's about to happen next with those fancy socks and the beautiful shoes at the end of them. I can take it, though.

After all, I just passed The Hop Test. ﻿
Posted by Jennifer at 4:02 AM