The Race That Got Me To THAT Race

I want to tell you all about yesterday's marathon. In order to get us all caught up to that point, though, I feel like I need to recap The Melbourne Half Marathon﻿, first. It was really one of the key components to my race, this past weekend. Also, I started this blog to have a place to tell my running stories. Soooo..here's another one!

I ran this half marathon, last year (pre-blogging days) and ended up with a disappointing (for me) finishing time. The course was very cool and challenging, though, and the city put on a great weekend of racing . When registration opened for the 2013 event, I signed up immediately. I wanted more pizza and free beer after the race redemption!

Fast forward a few months:
Minus the whole Jacksonville Bank Marathon debacle, my running and training had actually been going very well. I'd kinda tapped into a new Racing Mentality during The Shoelace Fiasco Race and felt like some really good racing experiences were about to be in my life. I got a teensy bit greedy and decided to try to double-dip with this race. I hoped it'd be a good gauge for some accurate goals for my upcoming marathon, but I also wanted a new PR.

Spoiler : It was both!

Here's the thing. Every time I sit to write this recap, it gets longer and longer. It was my 9th half marathon. It shouldn't have been such a big deal. But it was. It was a game-changer, for me. 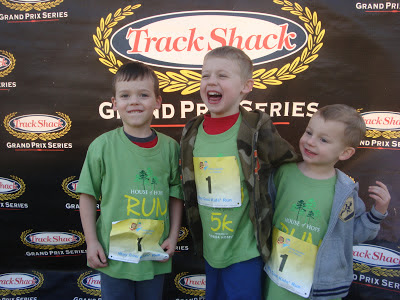 a couple of options for Game Faces, on race day
Overly dramatic? Of course!

Do I care? Nosiree

I fully acknowledge that plenty of magical factors were in place, this particular morning. The weather was optimal, for a road race. I was un-injured and very healthy, all around. The course contains two big bridges, but was otherwise flat and well-marked.

(source)
note: anytime the course map directs you over a big, blue area...assume you've got a bridge to climb
The Husband and boys were there to cheer* and I even had some friends from the running group to hang out with before we all started the race. Again, it was a pretty perfect setup. Here's the big difference between this race and all the others, though :
I set goal paces for every mile and forced myself to hit them*. It sounds so simple, doesn't it? You set a goal, and don't allow yourself to do anything other than reach that goal. In the middle of a tough race, that sort of logic starts to make less and less sense, though.
Number One: Racing Strategy finally "clicked" in my slow brain.
Number Two: It. Was. Easy.
I'd probably get a lot more admiration for reporting back that I struggled mightily for 13.1 miles, but managed to eke out a PR. Yes, it was hard work. However, it felt good enough that I started getting emotional at mile 5, because I realized, without a single doubt, I was going to blow last year's finishing time out of the water. That's how good this race felt.
Another indicator: My final mile was the only one where I slipped off the Goal Pace Wagon...because I couldn't slow down. It was my fastest. I was that really annoying person who sprints by the tired finishers, with tear-filled eyes, head held high and a huge smile.
I crossed the finish line, finally securing a shiny PR, and felt like I could've gone and run the entire course, again.
me and my (always faster) friend, Jennifer. No, I don't normally race shirtless. We can discuss, later.
By this point you're probably wondering why this post isn't titled: The One Where I Brag and Annoy Everyone.
My intent is, of course, to not do either. It was just an "a-HA" race, for me. I share in the hopes that it can help/inspire and also explain why I had the aggressive goals I did for my marathon.
1:39:28 Chip Time (1:44:36 in 2012)
(1:38:36 Garmin﻿)
3rd F35-39
30th Overall F
98th Overall
As always, thank you for reading. Thank you for ﻿commenting, too, even if it's only to yourself. Knowing that there are people to share this kind of stuff with makes it that much more awesome, to me.
*In the extended recap, there would be details about vomiting children and how hard The Husband worked to keep everything together, that morning. I'm so thankful for him.
*Also included in extended recap, would be those actual mile splits and plenty of other race details
﻿
﻿